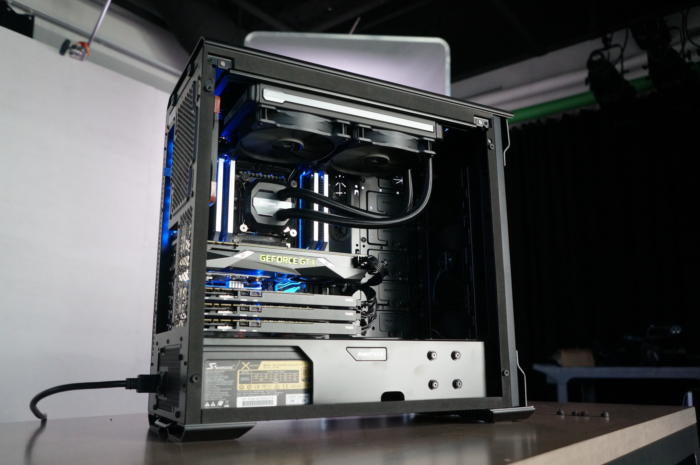 Looking to build the ultimate PC? If the price is no object, this is the hardware you want, from Intel’s Core i9 chips to Nvidia’s GeForce GTX 1080 Ti.

The heart of a PC is its processor. The ultimate choice is Intel’s 18-core Core i9-7980XE, and that should be an open ticket to be a high ranking member of the “PC Master Race” since this monster costs a cool $2,000-plus on Newegg. This monster reigns supreme in single-threaded performance, and since its 18 cores outnumber anything else currently available from Intel or AMD, the 7900X’s comes out on top of our multi-core tests, too.

Intel may be the king in performance, but if you’re looking for excellent multi-core capabilities without paying as much as a used car, the 16-core AMD Ryzen Threadripper 1950X ($1,000 on Amazon) delivers pretty good performance for half the price of the Core i9-7980XE. Alternatively, if you’re looking for the best performance for gaming, the Core i7-8700K ($370 on Amazon) should be your processor of choice for a fair price. It has 6 cores (12 threads) and it’s ticking between 3.7GHz and 4.7GHz — much more higher than what Intel’s 18-core chip is capable of out of the box.

Intel’s Core i9 chips use the X299 chipset and LGA2066 socket, so you’ll need to find a compatible new motherboard. The best choice should be the Asus Prime X299-Deluxe (nearly $295 on Newegg) — a particularly showy model with cutting-edge 802.11ad Wi-Fi and a tiny OLED “LiveDash” display that can show off vital system information. Alternatively, the Gigabyte Aorus Gaming 9 ($500 on Amazon) packs practically every feature you could ask for, from integrated SoundBlaster audio to reinforced building materials.

That’s just the tip of the iceberg though. Asus alone has revealed seven different Skylake-X boards, and it’s joined by the usual motherboard vendors—Gigabyte, MSI, ASRock.  These high-end motherboards don’t come cheap though; prices starting at $260 and most X299 boards go for $300 or more.

Intel’s X99 platform doesn’t stop at the most common 64GB limit for RAM. So why not enjoy an extremely future-proof 128GB kit of 3,200MHz Corsair Dominator Platinum memory ($1,550 on Amazon) and create some of the most epic RAM disks the world has ever seen? Or if you’re feeling the need for SPEED, Corsair also offers a 16GB kit of Vengeance LPX DDR4 memory clocked at a wild 4400MHz for $430 on AmazonRemove product link.

Granted, those prices could be a drawback, as could the fact that there are very few legitimate reasons to load up your PC with that much RAM. If you want to pick up a lower-capacity kit, or something from a different vendor, just make sure it’s DDR4 memory.

If you demand the pinnacle of PC gaming performance no matter the cost, you’ll want to pick up Nvidia’s Titan Xp ($1,200 on Nvidia’s website). This second revision of the “Pascal” GPU generation’s Titan uses Nvidia’s full-blown GP102 graphics processor to power the most graphically demanding games of today without breaking a sweat, even at 4K resolution.

But realistically, most gamers should pick up the still powerful GeForce GTX 1080 Ti ($700 on Amazon). It’s 25 to 35 percent faster than the vaunted GTX 1080 and immediately rendered the older $1,200 Titan X obsolete. Nvidia’s sure putting its best foot forward ahead of AMD’s looming Radeon Vega launch.

The GTX 1080 Ti is the first semi-affordable consumer card capable of hitting 60 fps regularly at 4K resolution with all the bells and whistles cranked to Ultra in many games. It’s also potent enough to deliver a no-compromises gameplay experience at very high frame-rates at 1440p resolution—especially when paired with a G-Sync monitor. The Titan Xp is a wee bit faster for $500 more.

If you’re going to drop big bucks on a take-no-prisoners graphics card, you’re going to want a high-end display to go with it. Monitors come in a wide range of shapes and sizes. Mainly everyone prefers the wide viewing angles and bright colours of IPS displays to the very slightly faster response times of TN panels, so that’s what all these recommendations consist of.

First, a trio of Nvidia G-Sync monitors, which smooth out stuttering and eliminate tearing during gameplay. For ultra-high resolutions, the Acer Predator XB271HK ($890 on Amazon) tops out at 60Hz, as going beyond that refresh rate is pointless at 4K with today’s technology. If you prefer your action faster—and more encompassing—the 3440×1440 resolution Asus ROG SWIFT PG348Q ($1,183 on Amazon) mixes an ultra-wide display with 100Hz frame rates. If pure speed is more your fancy, you’ll need to drop the overall resolution to snag a 144Hz monitor like the 27-inch, 2560×1440 Acer XB270HU ($750 on Amazon).

Gaming isn’t your thing? Professional photo-editing displays with true 10-bit colour and 99-plus percent Adobe RGB accuracy can get really pricey. The 4K display the experts at 144HzMonitors.com recommends, the NEC PA322UHD, costs a staggering $2,500 at Amazon.

Storage likewise comes in a variety of options. If you’re looking for sheer volume, a pair of recent releases has you more than covered. The 4TB Samsung 850 EVO ($1,458 on Amazon) and 10TB Seagate BarraCuda Pro ($428 on Amazon) are the largest ever consumer solid-state and traditional hard drives, respectively. Samsung’s SSD is obviously faster, but it costs much, much more, and the BarraCuda Pro’s 7,200rpm platters deliver surprisingly great access speeds for a mechanical hard drive. However if reliability is the mainly goal, WD wins the HDD-debate with the 6TB Black drive ($245 on Newegg )

What if pure speed is your primary goal? In exchange for some space, you can bask in the blistering transfer rates of an M.2 PCI-e NVMe SSD. The trade-off is worthwhile: The 2TB Samsung 960 Pro ($1,190 on Amazon) is easily one of the fastest drives ever created, hitting read speeds far over 2Gbps. Now that’s fast! Make this your boot drive and never worry about lag again.

With the marvellous power efficiency of modern Intel processors and Nvidia graphics cards, most single-GPU systems probably don’t need more than a 600-watt power supply. But this list is all about the best of the best—and investing in a beefier power supply is a good idea if you want to use multiple graphics cards or ensure room for expansion in the future.

The Corsair AX1500i ($396 on Amazon) is essentially a power supply paragon. This fully modular PSU has rated for 80 Plus Titanium efficiency and tremendous load regulation across all rails thanks to a cutting-edge digital control system. There is however a cheaper but similarly potent sibling, the Corsair AX1200i ($301 on Amazon).

This is totally up to you, but remember: everything should be fitted inside, so watch out for the right size your equipment needs!

Source: The best PC hardware you can buy today